FRENCH infrastructure manager SNCF Network is planning to close the Gisors - Serqueux line in Normandy for two years to enable electrification and modernisation of the 50km line, which will become an alternative route for freight traffic to the port of Le Havre. 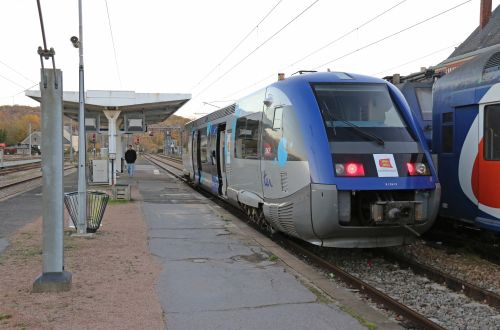 The route has already been partially modernised with the renewal of track and signalling, although the latest upgrade includes further track renewal and removal of level crossings.

The line will be electrified at 25kV ac, GSM-R will be installed, and noise abatement barriers will be built in populated areas; local opposition to the transformation of a sleepy branch line into a an important freight route has been significant.

A new south-to-west chord will be built between the Rouen - Amiens and Gisors - Serqueux lines at Serqueux, enabling freight trains from Paris to Le Havre to avoid reversal.

Whilst the line currently has a limited regional (TER) passenger service sponsored by the Normandy Region operated using diesel railcars, the objective of the electrification project is to create an alternative route from the port of Le Havre to Paris and further south for freight traffic. This would use the already-electrified 36.8km Monterolier-Buchy - Motteville freight line which bypasses Rouen to the north, to avoid the city of Rouen and the bottleneck imposed by double-track tunnels through the city’s main station.

SNCF Network claims the existing line via Rouen will be entirely saturated by 2018, meaning freight traffic will need to be rerouted. However, the forecast freight traffic level on the rebuilt electrified line is very low with only 25 freight trains per day in total (most of which will operate at night when there are few passenger services.

SNCF Network has awarded the contract to rebuild the line to Setec, France.

The overall project is budgeted at €260m, with the French state and the region of Normandy each contributing €90m. The remaining €80m will come from SNCF.