FRENCH National Railways (SNCF) revenues totalled €7.9bn in the first quarter of 2014, an increase of 1.7% from the same period in 2013, with all business units reporting growth apart from SNCF Voyages, which is responsible for long-distance passenger services, and recorded a 1.9% fall in revenues. 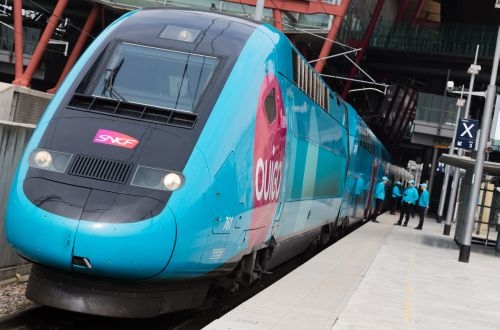 SNCF says the fall in SNCF Voyages revenue to €1.35bn from €1.37bn in the first quarter of 2013 is the deliberate consequence of reduced ticket prices and an expansion of its low-cost no-frills Ouigo high-speed service. However, it says the rise in France's VAT rate offset part of the impact of the customer-oriented fare policy leading to a 0.6% decline in passenger numbers.

In Europe as a whole ticket income actually rose by 1.7% due to improved performance of Thalys and the increase in high-speed services between France and Spain following the introduction of direct Paris - Barcelona TGV services on December 15. International markets now account for 15% of SNCF Voyages business, and 20% of SNCF's overall group activities, the same as in the first quarter of 2013.

SNCF's increase in first quarter revenues was primarily driven by a 3.3% increase at its regional passenger division, SNCF Proximités, from €2.9bn in the first quarter of 2013 to €2.98bn in the same period in 2014. Nearly two-thirds of this rise was due to growth at Keolis, which reported market growth of 6.2%, including a 14.4% increase from international markets including Australia, Sweden and the United States.

SNCF Infra, responsible for infrastructure and engineering, similarly reported a 3.9% increase in revenues to €1.24bn, while freight and logistics division SNCF Geodis reported further growth of 1.7% to €2.18bn after a 0.4% increase in the final quarter of 2013. This positive result had followed four consecutive quarterly declines.

SNCF says its outlook for the remainder of 2014 is brighter than 2013 with the economy showing signs of recovery in freight and logistics, while SNCF Infra and Keolis are expected to maintain their momentum. However, it remains cautious about prospects for domestic passenger services.