SWITZERLAND’s Southeastern Railway (SOB), has announced it is planning a pilot project to study the viability of automatic train operation (ATO) on a mixed traffic line, the first application of such technology on a Swiss mainline railway. 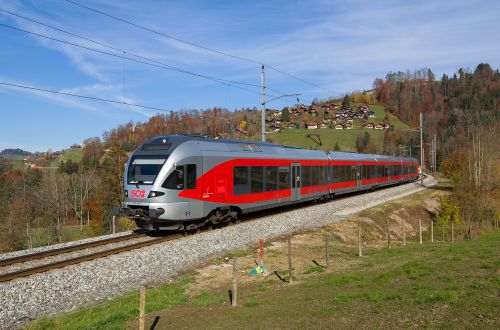 SOB has already applied to the Swiss Federal Transport Office (BAV) for financial support, which would enable it to begin procurement for the project.

According to Mr Markus Barth, head of infrastructure at SOB, the idea is to use existing rolling stock on existing infrastructure, the aim being to operate the train automatically.

SOB says automatic operation will not only improve safety, capacity, punctuality and efficiency on the entire system but also forestall signalling errors.

The pilot project will be carried out on the Mogelsberg - Wattwil - Nesslau-Neu St Johann Toggenburg line. The train will run without passengers in intervals between the regular services. This stretch is almost ideal, according to Barth, as it is equipped with modern signalling and operating systems, has few level crossings, modern rolling stock and new LFC communications equipment.

SOB hopes to launch the tender for the pilot project by the end of this year with a view to organising financing and selecting a contractor by mid-2018. The pilot is due to begin in 2020 with commercial operations starting between 2023 and 2025.