SPAIN celebrated the launch of high-speed services between Madrid and Alicante on June 17 with the official opening of the Albacete – Alicante high-speed line by His Highness Prince Felipe of Asturias, Spanish prime minister Mr Mariano Rajoy and transport minister Mrs Ana Pastor. 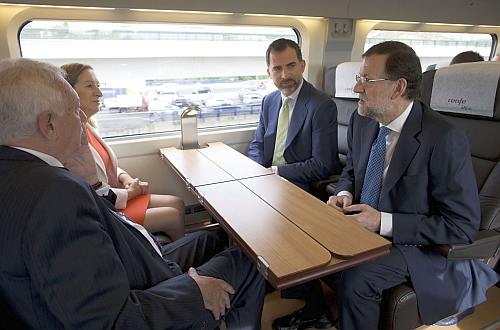 Commercial services will start on June 18 with nine AVE services per day in each direction, cutting journey times by 50 minutes to 2h 20min. Renfe is using class 100 and 112 AVE trains for the services, which call at Cuenca, Albacete and a new station at Villena.

The line is a 239km branch off the Madrid – Valencia high-speed line, and the initial 74km section as far as Albacete was inaugurated in December 2010. The second €1.92bn phase involved the construction of 100km of new line and the upgrading to 65km of conventional line built between 1988 and 2006. As a consequence, the maximum commercial speed is limited to 300km/h instead of 350km/h, which is the standard for most high-speed lines in Spain.

Services on the new section will be limited to 200km/h until ERTMS testing is completed, with journey times set to be reduced further when the system is fully operational.

The installation of signalling and telecommunications systems was carried out under a private-public partnership contract which includes 20 years' maintenance.

A full description of the new line and a look at the prospects for future of the Spanish high-speed network will appear in the July issue of IRJ.