SPAIN celebrated the completion of Iberia's first high-speed connection with the rest of Europe on January 8 with the inauguration of the 131km line between Figueres and Barcelona, which completes the 804km high-speed line between Madrid and the French border. 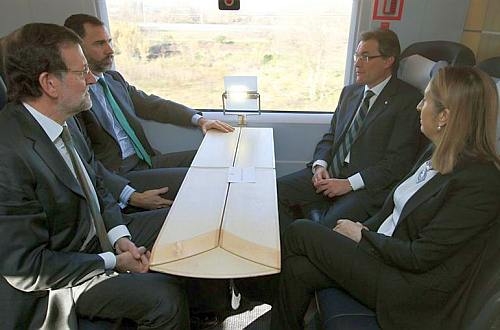 The first section from Figueres to Perpignan in France opened in late 2010 together with the first sections of the Figueres - Barcelona mixed-traffic high-speed line which enabled standard-gauge freight from France to reach the port of Barcelona for the first time.

The €3.7bn project involved the construction of 30 tunnels totalling 34.3km, including a 5.8km tunnel under the centre of Barcelona between Sants station and La Sagrera, and 60 viaducts with a total length of 12.6km. The line is equipped with ERTMS and electrified at 25kV ac.

Commercial services will begin on January 9, when Renfe will extend eight Madrid – Zaragoza – Barcelona services to Girona, and Figueras, with one additional train operating only between Figueres and Barcelona. The fastest Madrid – Girona journey time will be 3h 32min, while Barcelona – Girona will be reduced from 1h 30min to 37 minutes and Barcelona – Figueres will fall from two hours to 53 minutes.

While Renfe will only use class 103 AVE units on the domestic services to Figueres, seats in at least one coach of every train will be sold under its Avant regional high-speed brand rather than the higher-priced AVE brand. This will make commuting by high-speed train between the four main cities of Catalonia affordable.

Two of the trains from Madrid are timed to connect at Figueres with French National Railways (SNCF) TGV services to Paris, replacing the conventional connecting services running from Barcelona to Figueres. From April direct high-speed services will be launched between Barcelona and Paris.

The Madrid – Barcelona – Figueres line has been built with the aid of more than €3.44bn in European Union funding, in addition to financing from the European Investment Bank. The completion of the project takes the total length of the Spanish high-speed network to more than 3000km.