Strong start for Gotthard Base Tunnel

PASSENGER numbers on Switzerland’s north-south Gotthard axis have surged since the opening of the Gotthard Base Tunnel, according to figures released this week by Swiss Federal Railways (SBB), which show ridership on the route has risen by 30% over the last eight months compared with the corresponding period in 2016. 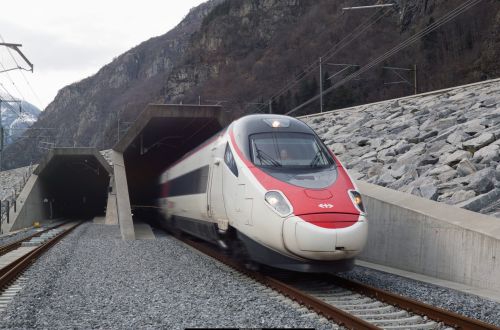 An average of around 10,400 passengers a day use the Gotthard Line, with total ridership of around 2.3 million since the 57km tunnel came into service. However, SBB CEO Mr Andreas Meyer says the full benefit of the tunnel, particularly for freight, will only become evident when the Ceneri Base Tunnel opens in December 2020.

In the meantime, SBB is learning from the experience already gained. Additional trains are now operating between northern Switzerland and Ticino in the south to meet increased demand at weekends. From December this, a daily early morning train will be introduced linking Basle and Lucerne with Locarno via the Gotthard Base Tunnel. A direct Frankfurt - Milan service will also be launched running south via the Gotthard Base Tunnel and north via the Lötschberg Base Tunnel. In addition, SBB will introduce a “Superveloce” Zürich - Milan service in 2020, stopping only in Lugano and Como and offering a journey time of just 2h 45min between the two financial centres.

As for freight traffic, the completion of these two tunnels is a key element in the creation of the 4m corridor between Rotterdam and Genoa. More than 17,000 freight trains have now passed through the Gotthard Base Tunnel, averaging 1080 tonnes in weight and 434m in length. From 2020 the route will be cleared for 750m-long trains, raising the maximum weight from 1600 to 2000 tonnes. Daily capacity will rise from 210 paths to 260.

At present, however, international freight traffic faces a number of challenges. Waiting times at international borders can be as long as 1h 30min in Basle and 1h 50min minutes in Chiasso, leading to added delays through Switzerland; here there is a need for improved coordination in planning construction projects and harmonising timetables.

Another challenge is the closure of the Luino line for six months for gauge enhancement work as part of the 4m project. To compensate, 160 trains a day are currently routed via the Lötschberg/Simplon axis, but with demand higher than expected, delays are frequent as the slightest disruption has a cumulative effect. To relieve the congestion SBB is negotiating with Italian infrastructure manager RFI in Chiasso to reschedule ongoing construction work to keep the line open on selected nights from September.