SWEDEN’s deputy prime minister and climate minister Mrs Isabella Lövin and infrastructure minister Mr Tomas Eneroth unveiled the 2018-2029 National Plan for the Transport System on June 1, outlining how the government will spend SKr 712.5bn ($US 81.4bn) on the country’s road, rail, aviation and port infrastructure over the next decade. 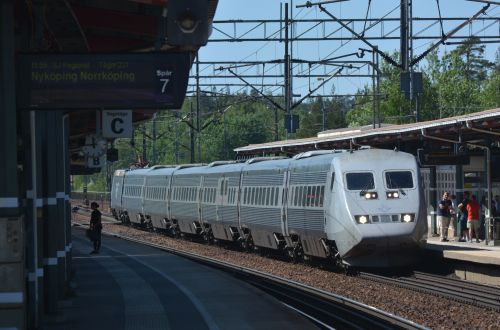 This represents an increase of around SKr 100bn compared with the previous (2014-2025) plan, although the headline figure includes several projects which will continue beyond 2029.

In addition to this sum, SKr 90bn raised through road congestion charging, track access revenues and co-financing with regional authorities will be used to fund improvements to the transport network.

Overall rail investment will increase by 32% compared with the previous plan to SKr 148bn. This means 77% of the budget for capital investment projects will be dedicated to rail.

“Now we are making the biggest railway investment in modern times,” says Eneroth. “Sweden will have a modern rail network with trains running on time across the country.”

The plan includes the construction of the section of the North Botnia Line from Dåva near Umeå to Skellefteå, approximately half of the proposed 270km route from Umeå to Luleå. The 12km section from Umeå to the Dåva industrial area was approved in 2014 and construction is due to begin this year. Work will begin on the Dåva - Skellefteå section after 2024. However, the remainder of the line to Luleå is not included in the 2018-2029 plan.

Another notable new-build project is the 60km double-track Gothenburg - Borås high-speed line, which is expected to serve Landvetter Airport. Infrastructure manager Trafikverket estimates the project will cost SKr 33bn at 2015 prices, although the government has only committed SKr 3.8bn through the transport plan. Construction will begin after 2024 and the line will ultimately form part of a high-speed link between Stockholm and Gothenburg.

The Järna (near Stockholm) - Linköping section of the route was included in the 2014-2025 plan and is slated for completion between 2033 and 2035, although no decision has been made on when work will start on the core Linköping - Jönköping - Borås stretch. However, the government has now confirmed that it will construct high-speed lines for 320km/h operation, rejecting proposals for a 250km/h design speed, which would have reduced construction costs.

A new high-speed line between Hässleholm and Lund is also included in the 2018-2029 plan.

Track-doubling or quadrupling is planned to ease congestion on several routes. Work will begin in 2024 on the construction of a new 39km double-track alignment to replace the existing single-track Gävle - Kringlan section of the Stockholm - Sundsvall East Coast Line. Track-doubling between Uppsala and Gävle was completed in 2017 and doubling of the 14km Njurundabommen - Sundsvall section was included in the 2014-2025 plan, with construction due to start in 2024.

Quadrupling of the final remaining double-track section of the Stockholm - Uppsala line and doubling of the Maria - Helsingborg Central section of the West Coast Line will be started during the period of the new plan. However, the start of track-doubling works on the Hallsberg - Mjölby line, a key freight artery, has been pushed back by at least four years and work will now begin between 2024 and 2030.

Electrification schemes in the new plan include Jönköping - Värnamo, Nässjö - Vaggeryd and Älmhult - Olofström, the latter in connection with the construction of a new line between Olofström and Blekinge. Älmhult on the Southern Mainline is the centre of operations for Ikea, the location of an intermodal terminal and a logistics hub for Volvo, which also has a large factory at Olofström. This means the Älmhult - Olofström line is regularly traversed by freight trains, and electrification would eliminate the current burden of switching between diesel and electric locomotives.