TWENTY-THREE years after the start of construction, test running will begin this week in the 8.7km Hallandsås tunnel, Sweden's longest railway tunnel, marking the completion of infrastructure works on the SKr 10.5bn ($US 1.25bn) project. 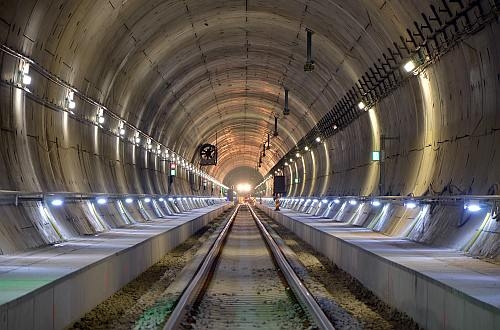 Construction of the twin-bore tunnel between Bastad and Förslöv originally started as long ago as 1992 but was suspended in 1997 when the project was one-third complete because of serious environmental concerns. Tunnelling eventually resumed in 2005 and the final concrete segment was installed in September 2013. The final section of track was laid in February and the installation of signalling, electrification, and telecommunications equipment was completed in the summer.

The tunnel is a key element in upgrading Sweden's West Coast Line between Gothenburg and Malmö, replacing a steeply-graded single-track section on the line which is now 85% double-track. The tunnel will allow the number of trains to be increased from four to 24 per hour, while doubling the maximum permitted weight for freight trains. It will also allow the maximum speed of passenger trains to be increased from 80km/h to 200km/h.

The tunnel is due to open to passenger and freight traffic on December 13.