SWEDEN’s prime minister Mr Stefan Löfven and transport minister Mr Thomas Eneroth joined Mrs Lena Erixon, director general of infrastructure manager Trafikverket for a groundbreaking ceremony at Ersmark north of Umeå on August 23 to mark the start of construction on the first phase of the 270km Norrbotniabanan from Umeå to Lulea. 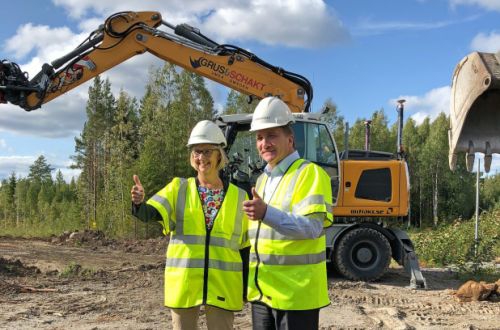 The 12km stretch from Umeå to the Dåva industrial area was approved in 2014 and major construction will begin in the autumn.

The Dåva - Skellefteå section is included in the 2018-2029 National Plan for the Transport System, which was published in June, and this accounts for around half of the total length of the route. Construction is due to begin on this stretch after 2024.

When all phases are completed, the mixed-traffic line is expected to halve the journey time between Umeå to Lulea, reducing transport costs by 30%.

The line will significantly reduce the transit distance for freight traffic to and from northern Sweden and enable the raising of the maximum train weight to 1600 tonnes, compared with 1000-1100 tonnes on the existing north-south corridor through Norbotten county.

According Trafikverket cost estimates, the pricetag for the overall project is SKr 30bn ($US 3.3bn) at 2015 prices.