THE first two of four tunnel boring machines (TBMs) which will be used to build 18.5km of twin-bore tunnel on the 22km Follo Line between Oslo and Ski were officially launched by Norway’s prime minister Mrs Erna Solberg and transport minister Mr Ketil Solvik-Olsen on September 5. 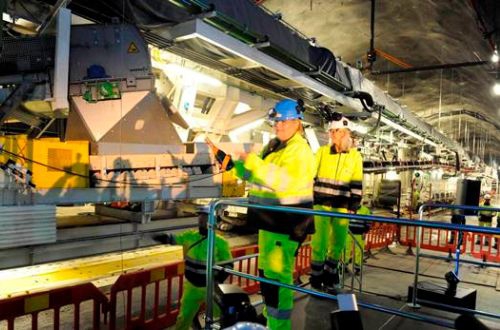 The 150m-long TBMs were built by Herrenknecht, Germany, and dismantled for shipping to Norway before being reassembled in a shaft at Åsland. The TBMs have been designed specifically to operate in the challenging geological conditions of the Ekebergåsen.

Construction is being carried out by a joint venture of Acciona and Gheller under a contract awarded by Norwegian infrastructure manager Jernbaneverket.

The tunnel will be the longest railway tunnel in Scandinavia and is one of the first in Norway to be constructed using TBMs.

The TBMs will drill and line the tunnel at a rate of 12-15m a day and tunnelling is scheduled for completion in 2018. The Follo Line is due to open in December 2021.