SWISS transport minister Mrs Doris Leuthard launched the first official test train into the 57km Gotthard Base Tunnel on December 16, marking the 900-day countdown to the completion of the project, which is scheduled for December 2016. 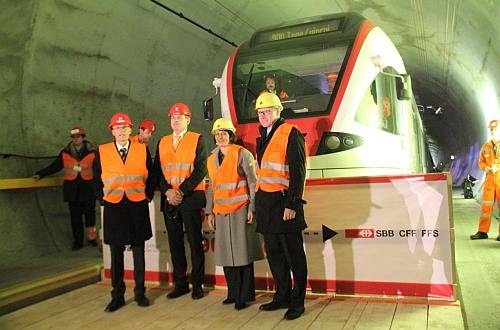 Test runs are initially being carried out in the 13km southern section of the tunnel between Bodio and Faido.

The minister travelled into the tunnel on board a class 524 Flirt emu, which reached the planned test speed of 160km/h. Test speeds will gradually be increased to 220km/h over the next six months.

All installations over the whole length of the twin-bore tunnel, including track, catenary, power supplies, signalling and telecommunications systems are due to be completed in October 2014 and the first test runs through the entire tunnel will be made in 2015.