Thalys set to become independent in 2015

THALYS, which operates high-speed services between Paris, Brussels, Amsterdam, Cologne and Essen, will become an independent company on March 31 2015 for the first time since it was set up as a purely commercial entity in 1996. 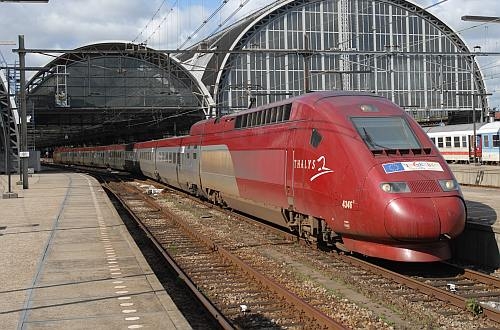 From March 31 2015, DB will cease to be a shareholder although it will continue to assist with train operations in Germany, and SNCF and SNCB will become the sole shareholders with a 60:40 split.

Ownership of the Thalys train fleet of 26 multi-voltage TGVs is currently divided between the four railways. SNCF and SNCB will transfer their fleets of 15 and seven trains respectively to the new Thalys company while DB and NS will retain ownership of their two trains each.

The change of ownership will mean an increase in the Thalys workforce from 200 to 550 employees. For the first time, Thalys will be able to communicate directly with its own staff on board its trains in France and Belgium instead of having to go through either SNCF or SNCB. Train conductors currently have two tablet computers and three PDAs for communication and these will be reduced to one of each.

Thalys will be headquartered in Brussels, with a branch office in Paris. There will be five new staff depots in Paris (two), Brussels Midi, Liège and Antwerp.

"Our shareholders have chosen to give Thalys the means to pursue its development," says Mr Franck Gervais, CEO of Thalys International, who will continue to head the new company. "A more effective organisation should allow us to gain control and give us the ability to go further, faster."

Thalys reported a 3% increase in turnover and a 3.8% increase in traffic up for the first nine months up to September 30. A 1.5% drop in traffic on the core Paris – Brussels section due to the poor state of the French economy, was offset by a 3.5% increase between Brussels and Germany, and a 17% increase on the Brussels – Amsterdam route following the demise of Fyra.