Tracklaying begins in Ceneri Base Tunnel

ALPTRANSIT Gotthard announced on July 28 that installation of railway infrastructure has begun in the 15.4km Ceneri Base Tunnel between Camorino and Vezia in southern Switzerland. 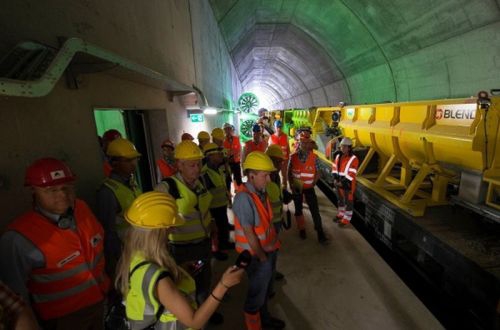 Initial works are taking place at the northern end of the eastern tube, where 200m of ballastless track has already been laid, with quality control checks now underway. When these checks have been completed, tracklaying will continue towards the southern portal at Vezia.

Tracklaying will be followed by the installation of catenary, power supplies, telecommunications, signalling, and tunnel safety systems.

A 60,000m2 facility with workshops and office space has been established at Camorino to act as a logistical base for the infrastructure works in the tunnel.

AlpTransit says that up to 200 people will be involved in the installation of infrastructure systems when this phase of the project reaches its peak.

AlpTransit will begin test operation in Spring 2020 before handing the tunnel over to Swiss Federal Railways (SBB) for trials and driver training. Commercial operations will begin in December 2020.