Tracklaying completed in Gotthard Base Tunnel

A MILESTONE in the construction of the world's longest railway tunnel was celebrated at noon on October 31, when a ceremonial gold sleeper was laid to mark the completion of tracklaying in the Gotthard Base Tunnel. 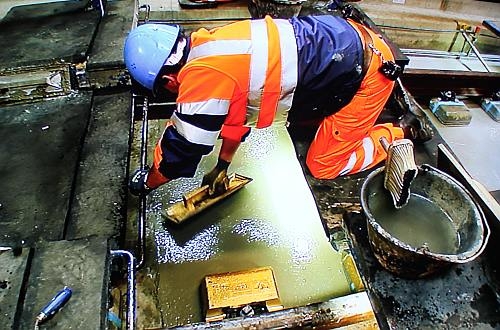 The completion of his phase of the project means diesel locomotives can now run through the entire length of the 57km twin-bore tunnel.

Around 290 km of rails were laid on slab track bed laid by a concreting train, which was specially developed for the Gotthard project. This enabled the concrete to be mixed on site and poured directly onto the trackbed. Final smoothing was carried out manually within a tolerance of just 0.5 mm. The work took 39 months to complete with around 125 workers working in shifts 24 hours a day.

"An important milestone in the Gotthard Base Tunnel has been accomplished on time," says Mr Renzo Simoni, CEO of AlpTransit Gotthard. "The work is on schedule, and on course for the opening of the tunnel on 2 June 2016." All other work on the Gotthard axis is also on schedule, with surface installations being removed and the land being restored to its original purpose.

Test runs through the entire tunnel are due to start on 1 October 2015, and all installations will need to be completed by this date with temporary subsystems removed. The tunnel will be formally handed over to SBB on 2 June 2016 for trials, in readiness for the start of commercial operations in December 2016.