Testing begins in Gotthard Base Tunnel

ALPTRANSIT Gotthard confirmed on October 16 that test trains have begun operating through the entire 57km Gotthard Base Tunnel as the project enters its final phase before opening to traffic in December 2016. 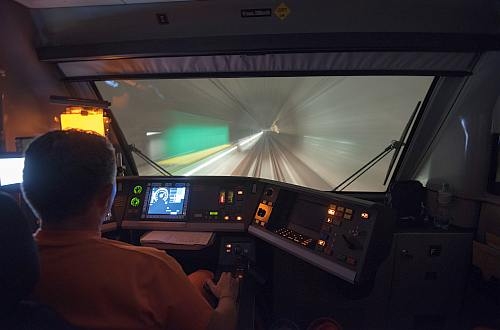 After receiving approval from the Swiss Federal Office of Transport trial operation began in the tunnel on October 1, and the first test run with ETCS Level 2 took place a few days later.

Testing of GSM-R radio is currently being carried out using a measuring coach provided by Swiss Federal Railways (SBB) and monitoring of the rail-wheel interface and interaction between pantograph and catenary contact wire will begin soon.
The speed of test trains will be incrementally increased and Alptransit expects to carry out testing at up to 275km/h during November and December. Freight train testing is due to start in February. German Rail's (DB) ICE S test train will be used to conduct high-speed testing in the tunnel.

Around 5000 test runs will take place by the end of May under the supervision of AlpTransit, with SBB providing locomotives, rolling stock, and train crew.

Following the completion of the test campaign, control of the tunnel will be transferred to SBB in time for the opening ceremony on June 1 2016. There will then be a period of driver familiarisation before the start of commercial services in December 2016.