THE president of the Italian autonomous region of Friuli Venezia Giulia Mrs Debora Serracchiani and deputy regional councillor for transport and mobility Mrs Maria Grazia Santoro attended the inauguration of a new station at Trieste Airport on March 19. 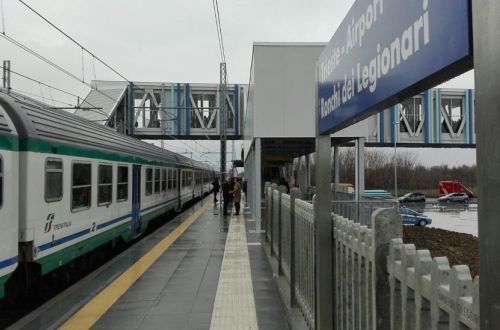 Trieste Airport is the eighth Italian airport to gain a mainline station, but is one of only a handful to be served by regional, intercity and Frecce high-speed services. The station has 400m-long platforms and is served by 70 trains a day between 05.00 and 23.00.

Located on the Trieste - Venice line, the station is considered strategically important by policymakers as it serves a cross-border hub between Italy, Austria and Slovenia.

The journey time to Trieste and Udine is around 30 minutes, with a second class fare of €4.50.

The upgrading of the coastal line will bring the station within one hour of the tourist attractions of Venice by 2026.

The station is linked to the airport terminal via a 425m-long footbridge, which is equipped with elevators, escalators and moving walkways.

A 1500-space car park and 16-bay bus station has also been built as part of the station project.