OPERATION on the converted 13.3km light rail line from Utrecht main station to Nieuwegein commenced on January 3, following the successful conclusion of testing and driver training, which began in early December. 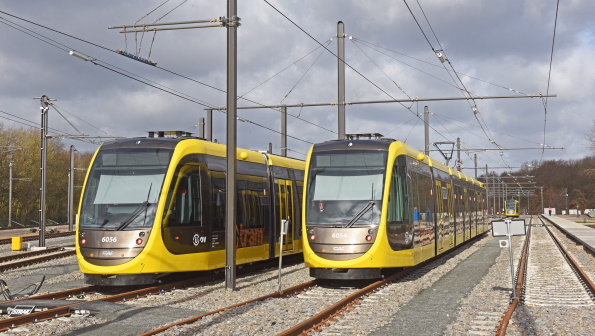 CAF Urbos 100 trams have started operations between Utrecht and its satellite town of Nieuwegein on 3 January 2021. Full operations are scheduled at the end of February.
Photo Credit: Quintus Vosman

Line 60 between Utrecht Central and Nieuwegein Centrum is running at a frequency of eight trams per hour per direction on between Monday and Saturday, and four on Sundays. Services are operated by seven-section CAF Urbos 100 low-floor LRVs with operation in multiple not yet possible due to delivery delays caused by the coronavirus pandemic. Opening of the line was also delayed from the original date of September due to administrative issues.

The Line 60 timetable and service frequency will increase when the Utrecht Central - Nieuwegein Centrum - IJsselstein 17.7km Line 61 enters service at the end of February with testing and driver training underway. The CAF LRVs are also in service on the 7.5km Line 22 between Science Park and Utrecht Central. Through services from Science Park via Utrecht Central to Nieuwegin and IJsselstein are expected to begin in the middle of 2021, with lines 22, 60, and 61 replaced by lines 20 and 21.

The upgrade project will cost €186m and involved conversion of stations and stop from operation with high-floor trams to the low-floor LRVs.

In Amsterdam the updated Ameltram between Amsterdam South and Westwijk in Amstelveen officially entered service on December 13 following completion of a project to convert the line from a light rail line used by both tram and hybrid high-floor tram/metro vehicles, which could use both overhead and third rail electrification, into a standard tram line.

The 600V dc Line 25 is operated using a fleet of 63 bi-directional CAF Urbos 100 15G LRVs, which are operated in multiple. A new depot with eight stabling tracks has been constructed south of Westwijk. The Amstelveen Line LRVs use an R-Net livery of black and grey with red doors, differing from the traditional blue and white used in Amsterdam. The deal with CAF includes an option for a further 63 LRVs.

The project cost around €300m, of which €225m was paid by the Amsterdam regional public transport authority and the municipalities of Amsterdam and Amstelveen. €75m was contributed by the Dutch Ministry of Infrastructure.

Work is continuing on extending the line by 4km and three stops from Amstelveen Westwijk to Uithoorn, a town of 30,000 inhabitants. The project is budgeted at €60m and is due to enter service in 2024.

For detailed data on light rail projects and fleet orders from around the world, subscribe to IRJ Pro.