VIENNA celebrated the official opening of its new central station on October 10 following a seven-year project that cost €987m and was funded by Austrian Federal Railways (ÖBB), the city of Vienna, European Union sources and property developments. 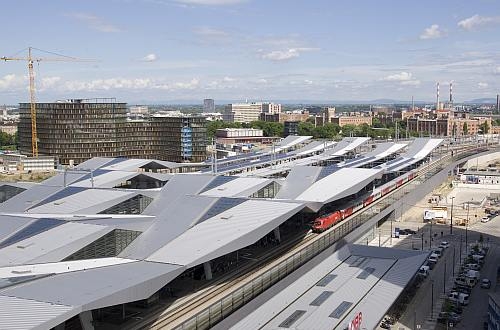 Construction on the station started in 2007 and some platforms were opened for regional trains in December 2012. Now the station building, the platforms, a passenger tunnel to metro line U1 and a shopping mall are open. However, there is some delay to track works which have only been completed towards Vienna Meidling station, and on the east side of the station the track is not expected to be ready until in December 2015.

As a result six out of the station's 10 platforms are currently only connected with tracks to Meidling station. Two additional tracks are being used by through freight trains and for shunting movements, while a new motorail terminal opened in June 2014 replacing the temporary terminal at Vienna Matzleinsdorf.

Despite the restrictions, from the timetable change in December, Vienna - Prague and Vienna - Budapest services will all stop at the central station and Railjet services to Graz and Villach will start at the new station instead of Meidling. The two-hourly Vienna - Prague Railjets will continue to Graz to provide an hourly Railjet service in both directions between Vienna and Prague.

Another new feature is a change to the Frankfurt - Vienna ICE service. Instead of terminating at the West station these trains will go straight to Meidling and the central station via the Lainz tunnel and will continue to Vienna airport. Some ICE sets will provide additional services from Linz to Vienna airport to offer a fast service to the airport every two hours. This is possible because of a new 2km chord linking the East Railway and airport line which is due to open in December. Vienna airport station has also been rebuilt with extended platforms.

Motorail trains from Feldkirch and from Germany will be diverted away from West station to the new terminal at the central station. Otherwise train services remain more or less unchanged with Vienna - Salzburg trains continuing to start at Vienna West for another year.

The big changes will take effect in December 2015 once all track work is complete at which point the station is expected to handle 145,000 passengers and 1000 trains per day. All ÖBB fast trains from Linz and beyond will be routed to the central station and there will be half-hourly Railjets and inter-city trains from Salzburg to the airport.

West station will only handle ÖBB regional trains including some Vienna - St.Pölten - Amstetten semi-fast trains via the new high-speed line. However, competitor Westbahn will continue to serve West station and has no intention to switch. ÖBB may also introduce some additional S-Bahn services such as Gänserndorf - Stadlau - central station - Meidling although it is yet to secure finance.