BRITAIN's Department for Transport (DfT) has awarded First Group the contract to operate the flagship InterCity West Coast franchise for 13 years and four months from December 9, ousting the Virgin/Stagecoach joint venture which has run the franchise since 1997. 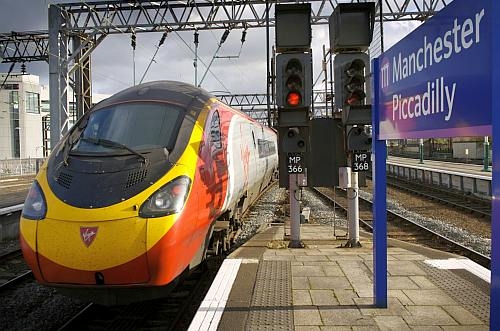 First plans to invest around £350m over the next five years, adding an extra 40,000 seats per day to West Coast services by 2016. The Pendolino tilting emus will be lengthened from nine cars to 11 cars by the start of the new franchise, increasing capacity by 28,000 seats per day. Journey times between London and Glasgow will be reduced by 15 minutes, and new direct services will be launched from London to Blackpool, Shrewsbury, and Bolton. The frequency of London – Preston services will be doubled and there will be more stops at Nuneaton and Milton Keynes.

From December 2016, First will introduce a new fleet of 11 six-car 200km/h emus on Birmingham Edinburgh/Glasgow services, which will allow the Voyager dmus currently used on these services to be redeployed. The introduction of new trains will add 12,000 additional seats per day on this route. The Pendolinos and Voyagers will also be refurbished with new seats and improved luggage space.

First has also pledged to improve onboard services by adding catering staff, enhancing passenger information, and introducing free wi-fi. Standard anytime fares will be cut by an average of 15% and First will expand its yield management capability in an effort to improve load factors on quieter services.

In addition to the incumbent, First beat off bids from rivals Abellio and Keolis, albeit at a hefty price. It will pay a premium of £5.5bn (net present value) to the DfT over the lifetime of the franchise, starting at £26m in the year ending March 2014 and rising to £739m in the year ending March 2026. Virgin Trains paid a premium of £160m to the DfT in the last financial year, and offered £4.8bn for the new franchise.

In recent weeks Virgin Group founder Sir Richard Branson has publically warned that the DfT risks repeating the mistakes of past franchises, where operators have submitted overoptimistic bids. In a statement issued this morning, Branson thanked Virgin staff for their hard work over the last 15 years, but issued a stinging attack on the government's franchising policy.

"[Our] achievements have counted for little – as this is the fourth time that we have been out-bid in a rail tender. On the past three occasions, the winning operator has come nowhere close to delivering their promised plans and revenue. In the case of the East Coast Main line, both winners – GNER and National Express - over promised in order to win the franchise and spectacularly ran into financial difficulties in trying to deliver their plans. East Coast is still in government ownership and its service is outdated and under-invested. Insanity is doing the same thing over and over again and expecting different results. When will the Department for Transport learn?"

Branson also indicated that the Virgin brand is likely to disappear from Britain's railways. "Based on the current flawed system, it is extremely unlikely that we would bid again for a franchise," he says. "The process is too costly and uncertain, with our latest bid costing £14 million. We have made realistic offers for the East Coast twice before which were rejected by the Department for Transport for completely unrealistic ones and therefore will have to think hard before embarking on another bid."