TRACKLAYING at the new Lodz Fabryczna station is well underway with 2km of the required 12.5km of track now in place for the station, which is set to become the hub of regional and long-distance railway services in the Polish city and a key interchange in the proposed Warsaw - Lodz - Poznan Y line high-speed network. 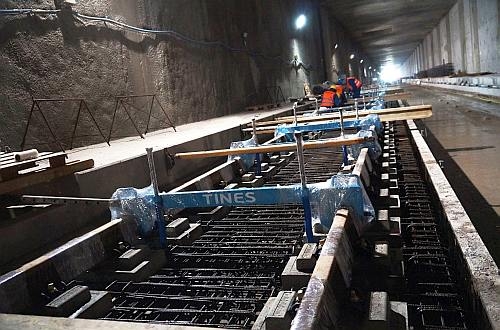 Regular deliveries of construction materials for the track project began in February and at the end of March, Tines, Poland, which is responsible for laying track as a subcontractor to Torpol, laid the first section of slab track. A consortium consisting of Torpol, Astaldi and PBDiM is responsible for executing the project, which is partly funded by a €85.5m grant from the European Union, and is estimated to cost Zlotys 1.7-1.9bn ($US 470-520m).

The three-level station comprises the ground floor, which offers an interchange with a four-platform tram station located on the south side of the station, and eight bus stops while the façade of the new building will resemble the original Lodz Fabryczna station which was demolished in June 2012. The second level is situated eight metres below the surface and includes a waiting room, ticket offices, commercial facilities and office space as well as 960 car parking spaces and a bus terminal. The third level 16m below the surface is the platform area with four platforms and eight tracks.

In total the project encompasses a 4.2km underground section, which will enable the introduction of cross-city services underneath the city centre towards Lodz Kaliska and will help to significantly reduce long-distance journey times to Warsaw.

The station is expected to handle up to 200,000 passengers per day although no opening date has yet been confirmed.