Work to resume on Rastatt Tunnel

GERMAN infrastructure manager DB Networks has announced that construction work to complete the rail tunnels under the town of Rastatt will recommence in 2020. The tunnels are now due to open in 2025, three years later than originally planned. 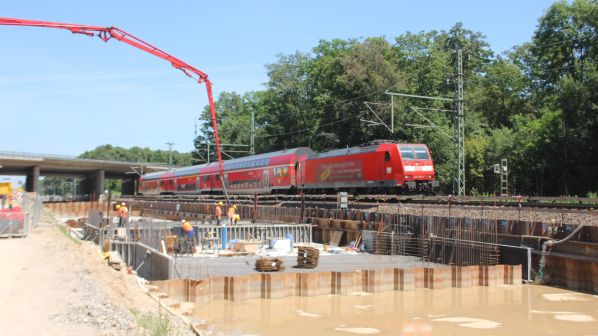 Designed for 250km/h operation, the Rastatt Tunnel is a key part of the long-term plan to quadruple the entire line between Karlsruhe and the Swiss border at Basle. This is one of the busiest sections of railway anywhere in Europe, with lengthy double track sections used by nearly 400 trains per day, including up to 216 freight trains, 77 long-distance passenger trains and 103 regional and local trains.

Construction of the twin bore tunnels using tunnel boring machines (TBMs), in places at shallow depths in alluvial sedimentary rocks, began in 2013. However, work was suspended after the newly-constructed eastern tunnel bore collapsed on August 12 2017 which not only disrupted construction but severed the existing main line on the surface.

The main line remained closed for seven weeks, leading to major disruption to European logistics services as no alternative routes were readily available. The cost of the closure and disruption to rail users and wider industry have been estimated at up to €2bn.

The line reopened on October  2 2017 after a 275m-long concrete slab was laid to support the railway on top of the area that had collapsed.

DB has now agreed its plans to complete the Rastatt Tunnel, especially the final southern sections, where the new line will join the existing Rastatt - Baden-Baden line.

The remaining 200m of the undamaged western bore will be completed by the ARGE Tunnel Rastatt consortium using the TBM that is already in position.

To permit construction of the eastern tunnel under the existing main line without danger of further disruption to the route, DB will first move a 700m section of the line to follow the course of the completed western bore, slewing the track around the construction site. Approval for this has been granted by the German Federal Railway Authority (EBA).

DB and ARGE Tunnel Rastatt plan to excavate the remaining part of the eastern bore using open excavation methods (cut and cover) including removal of the 160m-long section of pumped concrete that was used to fill section that collapsed in August 2017, entombing the TBM. Removing this concrete and the remains of the TBM will be a key part of the task to create a trench 17m deep.

This work is expected to commence in 2021 and DB Networks has applied for the necessary planning approvals to the German Federal Railway Office (EBA).

Following completion of the two tunnels, construction of remaining cross passages and entrance portals and fitting out will take place until 2024. DB currently expects the tunnel to open in 2025, along with approach lines on either side, completing the a four-track railway from Karlsruhe to Offenburg.