THE mayor of Wuppertal Mr Andreas Mucke unveiled the first of a new fleet of Vossloh trains for the German city's unique suspension railway to a crowd of around 5000 people at a ceremony at Vohwinkel on November 14. 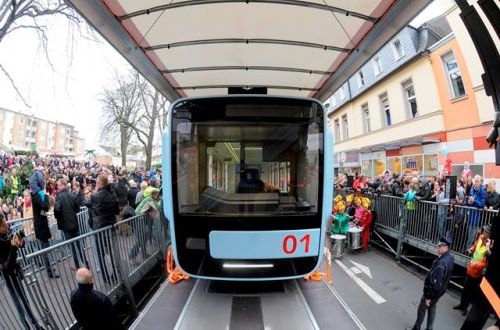 Wuppertal City Authority (WSW) placed a €122m order with Vossloh Kiepe and Vossloh Rail Vehicles in November 2011 for 31 two-car Generation 15 articulated trains to replace the current fleet of 27 two-car trains, which dates back to 1977.

The vehicles are being assembled by Vossloh Rail Vehicles at its Albuixech plant near Valencia in Spain, while Vossloh Kiepe is producing electrical equipment for the fleet at its Düsseldorf facility.

Nocturnal test runs will begin in January and the first trains are due to enter passenger service in the second quarter of next year. Full fleet introduction is scheduled for June 2016.

The 13.3km line from Oberbarmen to Wuppertal city centre and Vohwinkel opened in 1901 and carries around 80,000 passengers a day. In addition to the replacement of rolling stock, gantries are being renewed and a new traffic control system has been introduced. The line's 20 stations are being modernised and three of the oldest stations have been restored in their original art nouveau style.