ZÜRICH's main station has been transformed from a terminus into a through station thanks to the opening of the new Durchmesserlinie (DML) cross-city link on June 14. 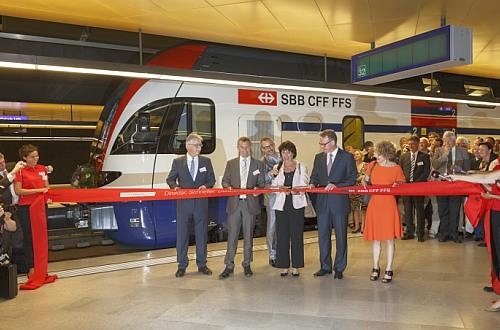 Around 200,000 people attended the opening ceremony with Swiss transport minister Mrs Doris Leuthard, and around 10,000 took the opportunity to ride on the "Tunnelturbo" through the new Weinburg tunnel. The first scheduled trains to serve the new Löwenstrasse underground station ran on June 15, when S-Bahn lines S2, S8 and S14 began running through the tunnel.

The DML links Altstetten with Zürich Main Station before curving under the city centre to Oerlikon via the new Weinberg tunnel.

The SFr 2bn ($US 2.2bn) line, which is Switzerland's largest urban construction project, has taken seven years to construct and cuts the journey time between the Main Station and Oerlikon by five minutes, as well as opening up the possibility of new direct links to other destinations. The section from Löwenstrasse to Altstetten is still under construction and due to open next year.