A full-size mock-up of a Metropolis train for lines 4, 5 and 6 of the Riyadh metro was presented in the Saudi capital by Alstom on June 8 to the governor of Riyadh, Prince Faisal bin Bandar bin Abdulaziz Al Saud, and the transport minister HE Suleiman Al Hamdan. 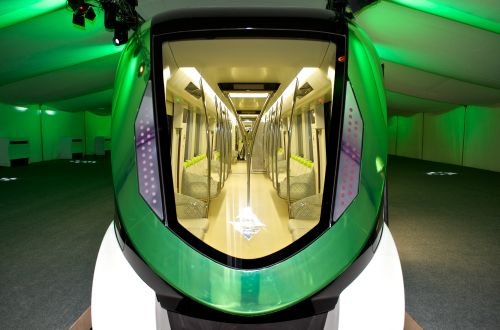 Mock-up of an Alstom Metropolis train for Riyadh metro.

Alstom is supplying 69 two-car 36m-long Metropolis trains for the Riyadh metro. Each train will have three classes: first, family and single class. The driverless trains are fully motorised to enable them to cope with gradients of up to 6%. The air-conditioned trains will have ergonomic seating, LED lightning, and what Alstom describes as an advanced passenger information system.

The presentation was part of an event to mark the completion of tunnel excavation works for the Line 5, one of the three lines totalling 64km being built by the Fast Consortium, which is led by FCC and includes Freyssinet, Saudi Arabia, Alstom, Samsung, Strukton, Setec and Typsa. The event also marked the start of track laying by Alstom on an at-grade section of Line 4, and will be the first tracks to be installed throughout the 176.6km six-line Riyadh metro project.

Alstom will also supply its Urbalis communications-based train control (CBTC) signalling system, as well as the power supply and its Hesop energy recovery system. All sub systems have been optimised and integrated to reduce energy consumption.

Interior mock-up of the Alstom Metropolis train for the Riyadh metro.