THE first of six passenger trains being built by CAF was handed over by the company's CEO Mr Andres Arizlorret to the chairman of Saudi Railway Company (SAR) Dr Saad A Al Qadhi and SAR's CEO Dr Rumaih Al-Rumaih at the new station in Riyadh. 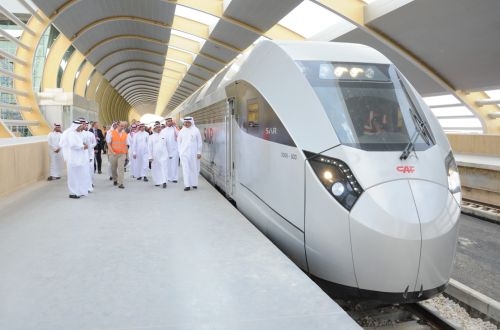 The train had completed its first test run on part of the North-South Railway between Nariyah and Riyadh, a distance of 1130km.

Testing and commissioning of fleet is expected to take 10 months, and each train must complete 10,000km of trouble-free operation before it can enter service.

SAR plans to introduce its first passenger services during the second half of 2016. SAR will operate the day trains between Riyadh, Buraydah and Ha'il, while the night trains will run from Riyadh via Hail to Jawf and Qurayyat near the Jordanian border.

Studies will start shortly into a rail link between SAR's new station in Riyadh and the station owned by Saudi Railway Organisation (SRO) to enable the operation of through services between SAR's North-South Railway and SRO's main line to Dammam.