TUNNEL boring machine (TBM) Al Mayeda, which started tunnelling at Al Corniche station on the Red Line of the Doha metro in November 2014, bored through into Msheireb station on June 11. 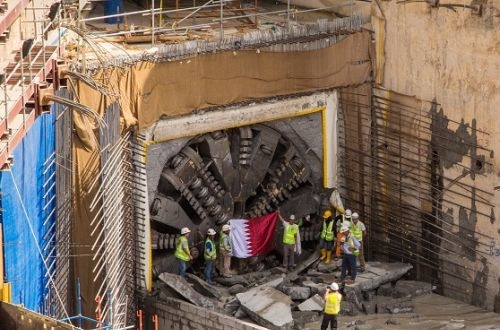 Msheireb will become the hub of the metro serving the Red, Green and Gold lines when it is completed in 2018. The breakthrough at Msheireb was delayed by a few days when the TBM encountered an unexpected water course which had to be plugged.

"Mining through different ground layers that vary constantly under highways and road facilities with a large-diameter TBM is a feat in itself," says Eng Hamad Ibrahim Al Bishri, deputy CEO of Qatar Rail, which is overseeing the project. "The short delay at the end shows how unpredictable our work can be sometimes. It is not always possible to know when these incidents might happen, but it is certain that they will occur at some point and we plan on this basis."

Al Mayeda has bored 1.6km of tunnel and will now be moved to Al Qassar station to begin tunnelling again. Al Mayeda is one of 21 TBBs at work on the Doha metro which have completed 30km of the 113km of tunnels under construction. Tunnelling is due to be completed in 2017.