PHASE 1 of Etihad Rail has carried more than 2 million tonnes of sulphur during the first year of trial operation, and full commercial operation of the 264km line linking Shah and Habshan with the port of Ruwais is expected to start soon. 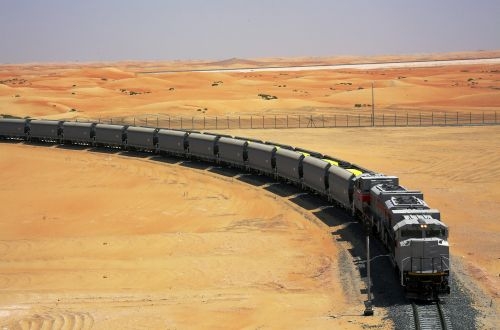 Etihad Rail is now awaiting final regulatory approval to begin full operation of the first railway in the United Arab Emirates. Once this has been obtained Etihad Rail expects sulphur traffic to increase significantly, as Etihad Rail's CEO Mr Faris Saif Al Mazrouei, explains: "We will continue to build on this success as we move towards our target of transporting more than 7 million tonnes of sulphur every year."

Etihad Rail has signed an agreement with Abu Dhabi National Oil Company to transport sulphur on the new line, and is negotiating with other companies such as DP World, ESI and Arkan. It has also signed more than 54 memorandums of understanding with prospective customers to transport petrochemicals, agricultural products, aggregates, and waste.

The railway is operated and maintained by a joint venture of Etihad Rail and German Rail (DB), and has a fleet of seven locomotives and 240 hopper wagons. A 1200km network is planned, and Etihad Rail will form part of the planned GCC rail network.