PRODUCTION has started at Alstom's plant in Katowice, Poland, of the fleet of 69 Metropolis trains which it is building as part of the Fast consortium for ArRiyadh Development Authority (ADA) for the new Riyadh metro. 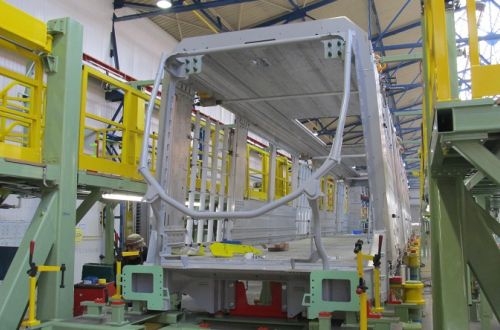 The first Alstom carbody for Riyadh metro under construction in Poland.

A full-size mock-up of the new trains, produced by Alstom, will go on display in the Saudi capital soon, and Alstom is due to deliver the first three trains to ADA in 2017. The trains are destined for lines 4, 5 and 6 of the new six-line network. ADA intends to open the first sections of the network in 2018 and complete the entire project by the following year.

Each two-car air-conditioned train will be 36m long and have three types of accommodation: first class, family, and single men. The driverless trains will be fully motorised to enable them to cope with 6% gradients.

Alstom is also supplying its Urbalis communications-based train control (CBTC) system, power supply and its Hesop energy recovery system as part of its €1.2bn contract. The Fast consortium is led by FCC, and also includes Samsung, Freyssinet Saudi Arabia, Strukton, Setec and Typsa. The total contract is worth €5.8bn.

Siemens has already begun construction of its trains for lines 1 and 2, while Bombardier has unveiled its designs for Line 3.