THE first electrically-hauled test train on Israel’s A1 Link between Tel Aviv and Jerusalem has travelled on the final section of the 57km new line and reached Jerusalem Navon (formerly Hauma) station. 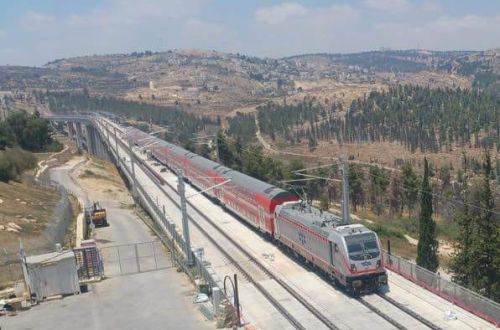 The first electric test train crosses the Ha'razim bridge, the highest on the line, just before entering the tunnel to Jerusalem Navon station.

The train travelled on the section between Latrun and Jerusalem Navon, where electrification has now been completed. However, several section of the A1 Link still have to be electrified, and delays in completing this could jeopardise the opening of the line on September 23. The opening date is also threatened by a recently declared labour dispute and the completion of final safety tests by TÜV SÜD, Germany.

A journey time of 28 minutes is envisaged between Tel Aviv Hahagana and Jerusalem Navon, which is about 1 hour faster than using the existing service via the old line to Jerusalem Malha.