THE first batch out of 240 wagons being supplied by CSR, China, to Etihad Rail has arrived in Abu Dhabi's port of Mina Zayed. 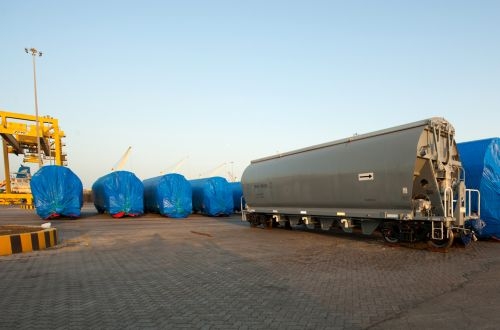 The wagons will be used to transport granulated sulphur on the 264km heavy-haul line currently under construction from Shah and Habshan to Ruwais.

The wagons' top hatch covers are designed to maintain the purity of the sulphur at 99.9%. The wagons will be hauled by a fleet of seven EMD diesel-electric locomotives which are due to arrive in the United Arab Emirates in the first quarter of 2013. The new line will have the capacity to haul 22,000 tonnes of sulphur per day.

"The timely arrival of the wagons is yet another indicator of the rapid progress being made on this strategic national project," says Dr Nasser Saif Al-Mansoori, CEO of Etihad Rail.  "Construction activity for the first stage of the rail project, which is being developed in partnership with Abu Dhabi National Oil Company (ADNOC), is far along and we are on track to see the first trains run from Habshan to Ruwais within a year."

Tendering is underway for the 628km stage two of Etihad Rail's future network. This will extend the first line to the ports of Mussafah, Khalifa, and Jebel Ali, and to the Saudi and Omani borders. Stage three will add another 279km to the network to serve the northern Emirates and will see the introduction of passenger services.