IRJ at Middle East Rail, Dubai: The United Arab Emirates has reaffirmed its commitment to the Gulf Cooperation Council (GCC) Railway project, confirming that it will complete its connection to the Saudi network within four years. 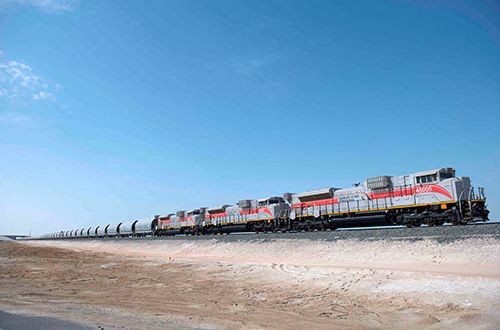 Dr Abdullah Salem al-Kathiri, director general of the Federal Authority for Transport Land and Marine (FTA-LM) told a press conference at the Middle East Rail exhibition and conference in Dubai on March 13 that all six GCC countries are moving forward with national rail plans which include links to neighbouring states.

Mr Khalid al-Olayan, representative of the General Secretariat of the GCC, said that the transport ministers of the GCC member states want to complete the first phase linking Oman with the United Arab Emirates, Saudi Arabia and Qatar by December 2021, with Kuwait and Bahrain joining the network by December 2023.

“It’s important to remember that rail connectivity between the GCC member states is not a new proposition,” Olayan says. “It is going ahead according to the timeline for the project recommended by the GCC transport ministers in June 2016.

Originally due for completion this year, the project has been delayed by financial challenges, largely resulting from the collapse in oil prices in 2014-15, which wiped $US 360bn off government revenues in the GCC states.

Etihad Rail suspended tendering for the 628km Stage 2 of the UAE’s national railway network in January 2016, and Oman halted work on its section of the GCC Railway four months later.