A 1.8km funicular railway which passes inside Carmel mountain in the Israeli city of Haifa has closed following a fire which broke out on the morning of February 4 and resulted in extensive damage to the line's two trains and infrastructure. 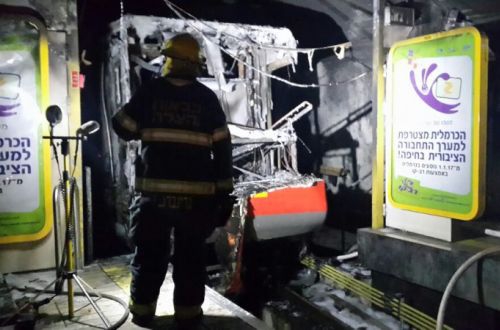 There were no injuries in the blaze as the line does not operate on Saturdays to mark the Jewish Sabbath.

Smoke was initially spotted at Paris Square station and soon spread to almost all of the line’s six stations. The fire destroyed one of the two car trains and a single car on the second train. It also caused electricity outages at other locations in Haifa while people living close to the area affected were instructed to remain indoors and to close their doors and windows.

The cause of the fire is still unknown. However, firefighters have confirmed that it was neither the result of sabotage or an electrical shortcut. They also commented that safety standards in the tunnels are poor and should be reviewed. Swiss consultant Von Roll has since been appointed to consult on required recovery activities.

The line is expected to remain closed for a few months while it is repaired and alternative bus transport has been offered to passengers. However, this does not match the line’s journey time of 12 minutes from the top of Carmel mountain to downtown Haifa.