ISRAELI prime minister Mr Benjamin Netanyahu, transport minister Mr Israel Katz, and Israel Railways’ general manager Mr Shahar Ayalon were among the passengers on a special train laid on to mark the inauguration of the Acre - Carmiel line on September 5. 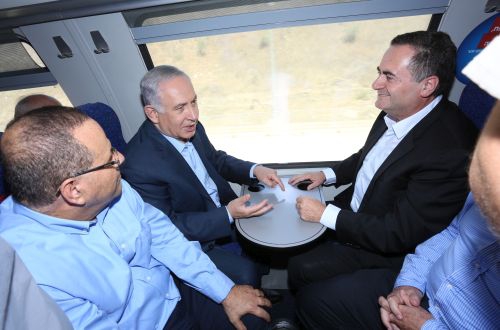 The train travelled on a return journey from Aihud station, where an inauguration ceremony was held, to Carmiel. The 23km line cost Shekels 2.8bn ($US 785m) and took five years to build and includes a 4.7km twin-bore tunnel.

In total, 18 trains will operate on the line everyday between Carmiel and Haifa, completing the journey in 34 minutes. Eight trains will also travel to Be’er Sheva, providing rail services between the Galilee and the Negev for the first time.

The line will initially operate using diesel traction. However, Katz confirmed that it will be electrified in the future as part of the railway’ electrification programme.

“This will cut journey times as well as reduce emissions,” Katz says. “Israel Roads, which was responsible for building the line to Carmiel, have been instructed to continue planning the line extension to Kiryat-Shmona in the Upper Gaillee near the Lebanese border.”

The stations at Carmiel will have car parking space for 700 vehicles and Ahihud will have 230 spaces, with capacity to increase both as required.

“We are ready to start services on September 20,” Ayalon says. “The two stations at Ahihud and Carmiel are already manned and the drivers and inspectors have been trained on the new alignment. They are anxious to start operating.”