Israel to double rail network by 2040

ISRAEL Railways (IR) presented details of its Shekels 123.6bn ($US 34.9bn) 2040 Strategic Plan at a conference at the Dan Panorama hotel in Tel Aviv on June 8, revealing ambitious proposals to double the size of the network over the next two decades with high-speed trains connecting key centres. 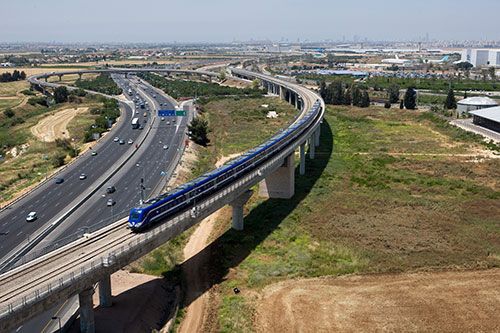 The plan allocates Shekels 94.78bn for infrastructure, and Shekels 19.26bn for rolling stock, Shekels 9.6bn for depots and stabling facilities, with an overall benefit:cost ratio of 1.0.

As the number of stations increases, IR envisages separate categories of inter-city and regional services to maintain rapid links between major towns and cities. IR general manager Mr Shahar Ayalon says double-track lines will be four-tracked and the Eastern Line between Kfar-Sava and Hadera East will be revived to enable direct links bypassing congested lines in the Tel-Aviv area.

The plan, which was drawn up by IR and the ministries of transport and finance, has been sent to transport minister Mr Israel Katz for feedback before submission to the cabinet for approval.

“Israel is undergoing a transportation revolution particularly on railways, but also on roads and at its ports,” Katz said at the conference. “The government is interested in rail links with neighboring countries, as was the situation prior to 1948 [the foundation of Israel] and such links can only contribute to the peace and stability of the area.”

IR is proposing a number of cross-border links including a line to Lebanon; Jenin - West Bank; Hebron - West Bank; Eilat - Aqaba (Jordan); Ashkelon - Gaza; and a connection across the Sinai desert to Egypt, following the alignment of the former Ottoman railway.