TUNNELLING has been completed on the Lusail light rail project while nearly 20km of the 113km of tunnels required for the Doha metro have been bored, Qatar Rail announced in Doha on April 21. 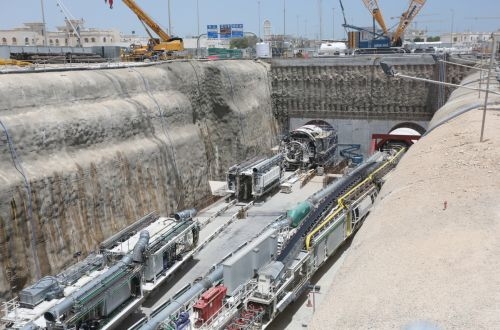 TBMs at the construction site for Al Sudan metro station on the Gold Line.

"During the past year we have achieved remarkable milestones on the Doha metro and Lusail LRT," Eng Saad Ahmed Al Muhannadi, Qatar Rail's CEO says. "All design and building contracts for Doha metro phase 1 have been awarded. Qatar Rail has received 21 tunnel-boring machines, with most of them launched and working underground in all the metro lines. The LRT project is moving forward as per the scheduled timetable."

All nine tunnel-boring machines (TBMs) have been launched on the Red Line and have bored 11,880m of tunnel so far. The six TBMs on the Green Line have completed 6653m of tunnel. The Gold Line is the least advanced with only 150m of tunnel bored so far by its six TBMs.

Al Muhannadi says a flooding incident at Al Bidda station on the Red Line North earlier this year damaged a TBM, which is currently undergoing repair and should relaunch next month, but has not delayed the project. The flooding did not cause any staff injuries or environmental problems.

Qatar Rail says it expects to complete the tunnelling for the metro by the second quarter of 2017 with the first phase of the metro scheduled for completion in 2019. The first of the four Lusail LRT lines is due to open 2018 followed by the remaining three in 2020.