A new opening date for the Haramain high-speed project, announced last November, was ratified on January 16 during a visit to Saudi Arabia by a Spanish delegation led by Spain’s King Felipe VI when Saudi authorities agreed to extend the delivery deadline by 14 months until March 2018 and to acknowledge €150m in cost overruns. 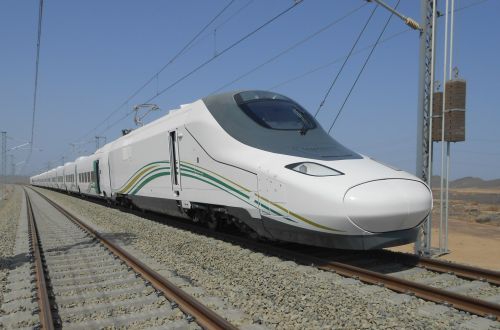 A Talgo high-speed train on a test run on a completed section of the Haramain HS line.

It is also intended to have a partial opening of the line this year for demonstration purposes.

The Al Shoula consortium, which is responsible for equipping the 453km line linking Medina, Jeddah and Mecca, had initially sought around €500m in compensation for higher-than-expected costs, but in exchange for accepting substantially less they were granted more time to complete the infrastructure, and consequently avoided delay penalties of more than €400m.

The Haramain project has suffered from a series of delays. It was initially expected to be completed during the second half of 2016, but construction difficulties and governance problems inside the consortium led to revisions to the opening date several times. In July 2015, Al Shoula acknowledged problems with the construction of a 3km tunnel on the outskirts of Jeddah but even so it still expected to open the line by January 1 2017.

IRJ will publish a feature on the Haramain high-speed project in February. For more information on railway projects around subscribe to IRJ Pro.