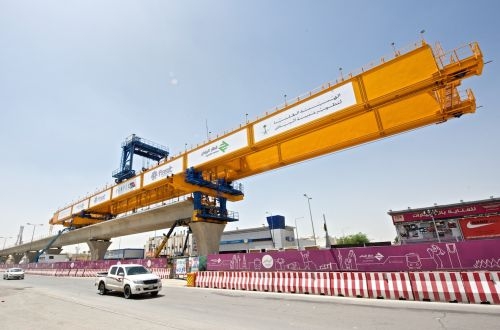 A section of viaduct under construction on Line 6 in Riyadh.

Fast was awarded a $US 7.8bn design and build contract for the three lines, which total 63.8km with 26 stations, in 2014. Fast is led by FCC, and includes Alstom, Samsung, Freyssinet Saudi Arabia, Strukton, Setec and Typsa. Alstom is supplying 69 two-car Metropolis trains, its Urbalis communications-based train control (CBTC) system, power supply and its Hesop energy recovery system as part of its €1.2bn contract.

"One of the main challenges is logistics," Mr Jaime Freyre, Fast's project director, told IRJ. "There are 50,000 people of 38 nationalities speaking 22 different languages working on the entire project. None of them speak in their own language as everyone tries to use English. We had to provide accommodation, food and transport for about 4000 people, and the first year was spent mainly in mobilisation."

Another challenge has been coordinating with the two consortia building the other three lines, as well as with the client ArRiyadh Development Authority (ADA), the city and its citizens. "We have had to divert utilities and road traffic throughout the city, so we have had to find innovative ways to communicate with people."