TESTING is stepping up in Riyadh on the city’s new 176km six-line metro network, with the first lines on course to open in the Saudi Arabian capital in 2021. 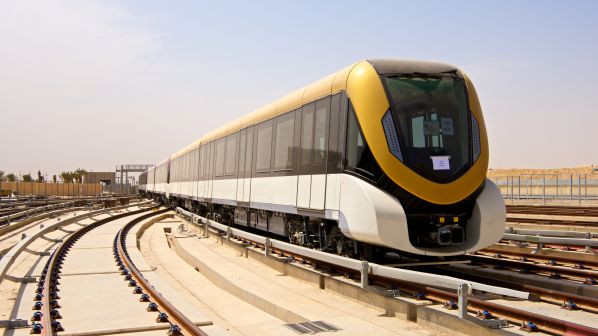 Alstom is supplying a fleet of 69 Metropolis trains for lines 4, 5 and 6.
Photo Credit: RCRC

Timetable tests on lines 4 and 6, respective 30km and 13km overground lines, are currently underway with a view to handing the lines over to the operator, the Flow consortium, comprising Alstom, Hitachi Rail STS, and Italian State Railways (FS), in the second half of the year. Flow will then simulate network operations ahead of the start of passenger services.

“We are running in what we call carousel mode with 35 trains to simulate the timetable, the maintenance and various other areas,” says Mr Lindsay Vamplew, project director for the Ramped consortium comprising WSP (previously Louis Berger) and Hill International, which is overseeing package three of the project comprising lines 4, 5 and 6.

“At the same time we’re trying to complete the stations, with building systems the last part of that. We are looking for those two lines to go into system demonstration in roughly May and potentially trial running where we handover to the operator to simulate the network in June or July, with a view to getting those two lines running next year.”

The underground 25km Line 5 is running a little further behind. Carousel running is underway, but Vamplew says these trials have not yet reached the stage of replicating the complete service. “It will be September before we go into some of system demonstration and we will look towards the end of the year to handover to the operator,” he says.

Work is also progressing on lines 1, 2 and 3, which are similarly in the final 10-12% of the works to be implemented although slightly behind on rolling stock testing, which is not at the carousel stage yet, according to Mr Carter Rohan, project director for the RMTC project management consultancy. RMTC is made up of Parsons, Egis and Systra, which is overseeing packages 1 and 2 covering lines 1, 2 and 3.

“We’re just starting dynamic testing but we’re not far behind,” Rohan says. “The primary works that we have left on our plate are related to finishing up some of the civils. We've got that mostly all complete. But we're into the mechanical-electrical phase where we're testing, putting in ventilation and air-conditioning systems, and doing that testing and commissioning. And we’re now focusing on ramping up the signalling, Scada testing, and all the systems related to the role of the rolling stock.”

Work on the $US 24.4bn metro project commenced in April 2014. Riyadh is also developing an integrated city-wide 1900km bus network with around 3000 stops. There are currently 10 million motorised passenger journeys in Riyadh every day, with 80% by private car and only 2% using public transport. The new public transport network will go a long way to rebalancing this modal split.

The interview with Carter Rohan and Lindsay Vamplew will feature in an upcoming Rail Group on Air podcast. The February 2021 edition of IRJ will also include an in-depth article on the Riyadh metro project - the largest single-phase metro construction project currently underway around the world.