RIYADH's King Abdulaziz Public Transport Authority has revealed the first images of the new trains for lines 1 and 2 of the Saudi capital's six-line metro network, which is currently under construction. 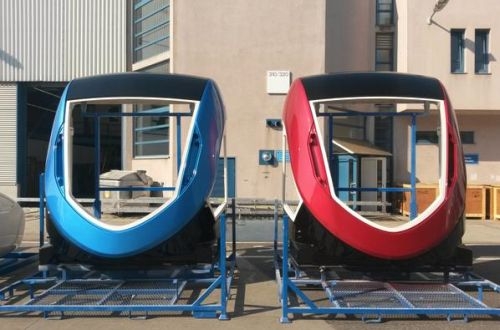 Siemens is manufacturing the driverless trains at its Simmering plant in Vienna, and the sets are based on its Inspiro platform although the vehicles incorporate a different car-body shape from the conventional design. The pictures show the nose of the sets as well as a series of interior shots.

Siemens is supplying 74 two and four car 90km/h trains for lines 1 and 2 under a €1.5bn turnkey contract which also includes the supply of CBTC, 31 electronic interlockings, the control centre and electrification. The trains feature a high-capacity air-conditioning system while the bogies, traction system, brakes and doors are being fitted with special seals and filters to reduce the ingress of sand. Delivery is expected to commence in 2016.

Siemens is a member of the Bacs consortium, led by Bechtel and including Aecom, Saudi company Almabani General Contractors, Middle East-based Consolidated Contractors Company. Bacs was awarded a $US 9.45bn contract to design and construct as well as supply equipment for lines 1 and 2 in July 2013 by Arriyadh Development Authority (ADA), which is overseeing the metro project.

Photos on the @RiyadhTransport Twitter page also show progress on underground and elevated sections of the network, including Line 4 which runs to Khalid International Airport. Tunnelling on Line 1 commenced in July, with the project requiring the construction of 35km of tunnels beneath the city.

ADA is aiming to open the first sections of the network in 2018 and complete the entire project by the following year.