ALSTOM has successfully handed over the first of 69 driverless metro trains it is delivering to Arriyadh Development Authority (ADA) for use on lines 4, 5 and 6 of the Saudi capital’s metro network. 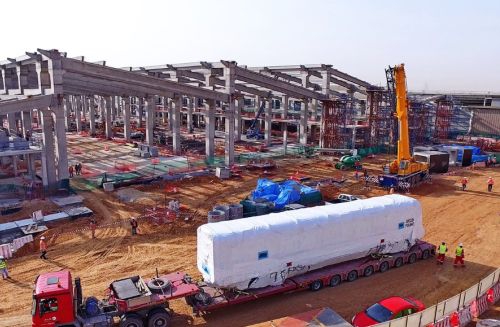 The 750V dc Metropolis trains are currently being manufactured at Alstom’s plant in Katowice, Poland, and the manufacturer says it is on target to complete delivery by the end of 2018.

The 90km/h two-car trains are 36m long and can accommodate up to 231 passengers. Each train features three classes - first, family and single class - all of which are separated by a glass partition.

Alstom is a member of the Fast consortium, which is overseeing the deployment of a fully integrated metro system for lines 4, 5 and 6. The three lines have a total length of 64.5km and include 29 stations, 30km of viaduct and two depots. In addition to rolling stock, Alstom is also responsible for signalling, trackwork, and electrification.

The first train left Katowice in January, travelling to Saudi Arabia via the port of Hamburg. Two further trains are undergoing dynamic testing in France and a fourth train has been sent to the Rail Tec Arsenal climatic test chamber in Vienna.

When production is fully underway up to five trains per month will roll off the assembly line at Katowice. According to ADA, construction of the 176km six-line network is now 48% complete, with the project on budget and on schedule for completion in early 2019.