DUBAI Roads and Transport Authority (RTA) signed a Dirhams 105m ($US 28.6m) contract with Serco, Britain, on September 14 for the operation of the Al Sufouh Tramway. 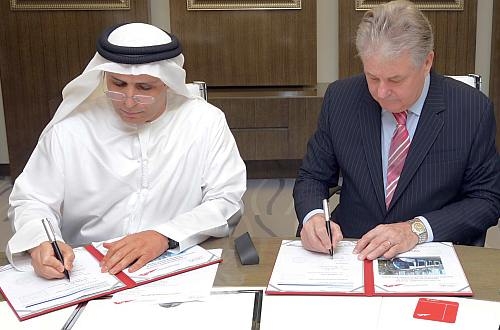 The agreement was signed in Dubai by RTA Chairman His Excellency Mattar Al Tayer and Serco director for Africa, the Middle East, Asia, and Australia Mr David Campbell.

The contract runs for five years from the opening of the 10.6km first phase, which is due to be inaugurated in November 2014, and also includes a further 15 months of preparation for the start of operations, when Serco will be responsible for recruiting and training staff for the route.

Rolling stock and fixed installations will be maintained by a consortium of Alstom and Cofely Besix FM under a 13-year €120m contract signed in February 2012, which includes an option for a five-year extension.

For the first phase Alstom is supplying a fleet of 11 Citadis 402 low-floor LRVs, the first of which is due to be delivered to Dubai in December. A further 14 vehicles will be delivered for the opening of the 4km second phase.