THE governor of Riyadh Prince Faisal bin Bandar says that passenger services on the southern section of Saudi Railway Company’s (SAR) North-South Railway from Riyadh to Al-Mujamma'ah will begin at the start of 2017. 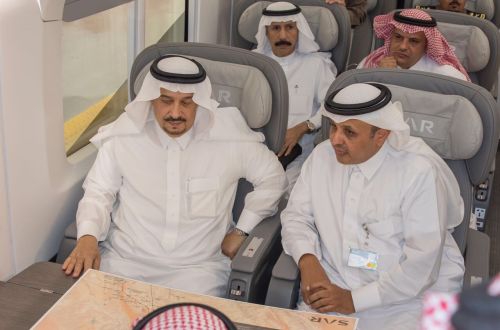 The opening is a little later than previously announced and only covers the first section of the line running north from Riyadh. The service will gradually be extended north from Al-Mujamma'ah via Qassim, Hail, and Al-Jouf to Al-Qurrayat on the Jordanian border, a distance of 1250km.

Speaking during a test run on October 20, Prince Faisal pointed out that studies had demonstrated the economic feasibility of the project. He also noted that the trains will be driven and operated by young Saudi citizens. “We are proud of our young Saudis who will drive this train,” Prince Faisal said. “SAR has worked from the beginning to send Saudi citizens abroad to learn how to operate the train.”

CAF is supplying four day trains and two overnight trains under a contract worth in excess of €400m, and the first train was handed over to SAR in Riyadh in September 2015. Each 280m-long day train comprises a diesel power car at each end and nine intermediate coaches seating 444 passengers, while the night trains have a similar formation but with 13 intermediate coaches. The trains have USB mobile phone chargers, Wi-Fi, special seats to provide privacy for passengers, and a restaurant car.