SAUDI Railway Company (SAR) inaugurated its first passenger services on February 26 on the Riyadh - Al Qassim section of the North-South Railway with an intermediate stop at Majmaah. 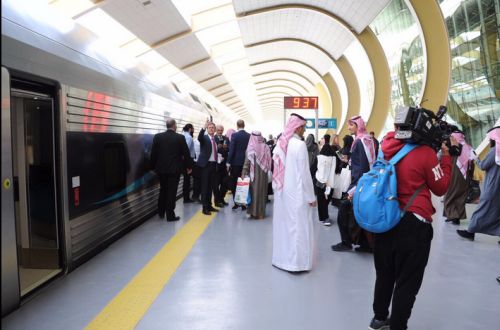 SAR is operating what it describes as an Exhibition Service until April 1 with a flat fare of Riyals 40 ($US 10.67) for adults, Riyals 20 for children and Riyals 4 for infants. One round trip is being operated five days per week between Thursdays and Mondays. The northbound train departs Riyadh at 10.00 and arrives at Al Qassim at 12.31, returning at 15.00 with the same 2h 31min journey time.

Under phase 2 of the four-phase introduction of passenger services, which starts on April 2, a daily round trip will operate seven days per week departing Al Qassim at 05.00 and returning from Riyadh at 18.00.

Phase 3 will see the introduction of a daily service between Hail and Riyadh, with all four SAR’s day trains supplied by CAF in service. From 2018, SAR will introduce two passenger night trains also supplied by CAF, serving Qurayyat, Al Jauf, Hail, Al Qassim, Majmaah and Riyadh.

The night trains comprise two 160km/h diesel-electric locomotives and 13 trailer coaches including sleeping cars, a restaurant car, and car carrier wagons. Each night train can seat 377 passengers, with 42 in business class, 238 in economy class, and one wheelchair space, plus 92 berths in 24 cabins, and capacity to carry 16 cars. These trains also have family sections, prayer areas, Wi-Fi and a similar information system to the day trains.

Both types of train are designed to operate in desert conditions in temperatures of up to 55oC.

Dr Rumaih Al-Rumaih, CEO of Saudi Railways Organisation and former CEO of
SAR, on board the inaugural train.