THE governor of Hail region, Saudi Arabia, Prince Abdulaziz bin Saad officially inaugurated the new station at Hail on Saudi Railways Company’s (SAR) North-South Railway on November 22 ahead of the start of passenger services on November 26. 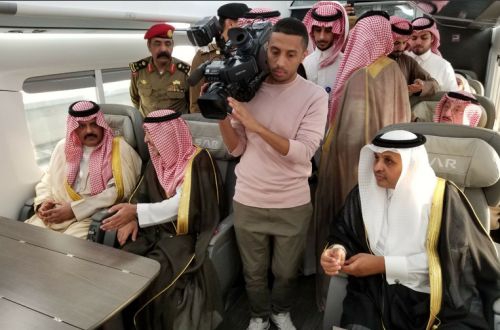 Prince Abdulaziz bin Saad (left) on board the inaugural SAR train to Hail.

The daily Riyadh - Majmaah - Qassim passenger service will be extended north to Hail on three days week. On Sundays, Wednesdays and Fridays the 09.30 from Riyadh will arrive in Hail at 14.06, and return from Hail at 15.25 with a 20.11 arrival in Riyadh. Hail is 623km north of Riyadh.

Hail station has two platforms and is built on three levels. It has separate arrival and departure halls, a restaurant, shops, tourist information desk, car hire desks, a post office and a mosque for 300 worshipers.

SAR plans to introduce passenger services on the northern 645km section of the North-South Railway from Hail to Jouf and Al-Qurayyat on the Jordanian border in 2018.