TEST running has started on part of Saudi Railway Company’s (SAR) 2750km North-South Railway in preparation for the launch of passenger services on the southern section from Riyadh to Qassim at the end of the year. 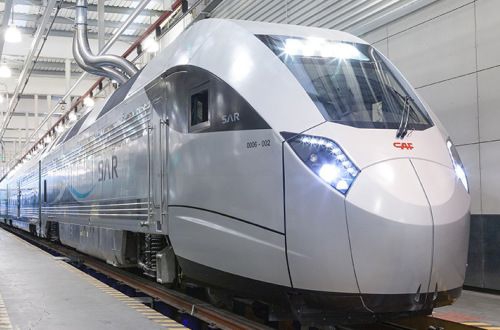 One of the six passenger trains supplied by CAF reached 136km/h in the Hail area on July 13 as testing ramps up to reach the maximum speed of 200km/h.

SAR plans to start with a daily service from Riyadh to Qassim with an intermediate stop at Mujamma'ah and a journey time of just over 2 hours. The day service will eventually be extended north to Hail, while an overnight service will link Riyadh with Qassim, Hail, Al-Jouf and Al-Qurrayat, a distance of 1250km.

CAF is supplying four day trains and two overnight trains under a contract worth in excess of €400m, and the first train was handed over to SAR in Riyadh in September 2015.
Each 280m-long day train comprises a diesel power car at each end and nine intermediate coaches seating 444 passengers, while the night trains have a similar formation but with 13 intermediate coaches. The trains have USB mobile phone chargers, Wi-Fi, special seats to provide privacy for passengers, and a restaurant car.

SAR began operating phosphate trains in 2011 from Al Jalamid to refining plants at the Arabian Gulf port of Ras Al-Khair, and introduced bauxite trains in May 2014 between Al-Baeetha mine near Qassim and an aluminium smelter at Ras Al-Khair.