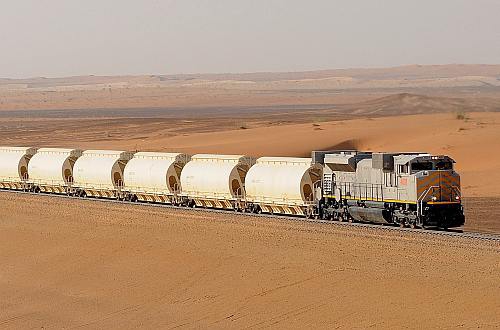 SAR began operating phosphate trains in May 2011 between mines at Hazm Al-Jalameed and Ma’aden’s processing and export sites at Ras Al-Khair on the Arabian Gulf, a distance of around 1400km. SAR started transporting molten sulphur from the Eastern Province city of Waset to Wa’ad Al-Shamal in the north last May after connecting the latter to its network. A month later, it started transporting commercial phosphoric acid from Wa’ad Al-Shamal to Ma’aden’s refinery in Ras Al Khair.

SAR’s molten sulphur wagons are equipped with the latest safety equipment such as thermal insulation and safety valves to prevent combustion during transport as well as heating systems in each vehicle.

SAR freight trains carry about 16,000 tonnes per trip in trains consisting of three locomotives and more than 160 wagons. SAR says each trip is equivalent to taking 640 trucks off the roads.