THE first trial run on the Haramain high-speed line with VIPs and invited guests onboard was organised by Saudi Railways Organisation (SRO) between Jeddah and Medina on July 25. 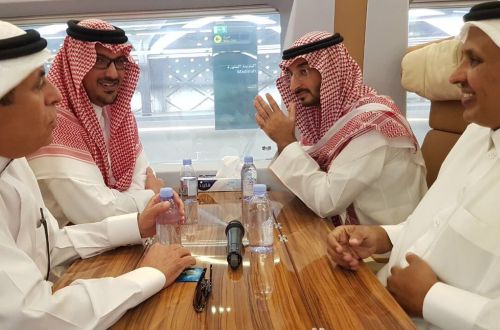 The Talgo train departed Jeddah at 13.00 and stopped at King Abdullah Economic City (KAEC) in Rabigh. It departed KAEC at 15.00 and arrived in Jeddah at 16.15 where the train was met by Prince Saud Bin Khaled, deputy emir of Medina. The train travelled at between 300 and 330km/h during the second part of the journey.

“We are fully prepared for the official opening,” says Mr Mariano De La Vega, project manager with Talgo. “Everything is in working order. The train will officially come into operation as soon as Saudi officials give us the green light.”

The 450km Haramain high-speed line will connect Saudi Arabia’s two holy cities of Mecca and Medina with intermediate stations in Jeddah, King Abdulaziz International Airport in Jeddah, and KAEC. The double-track electrified line has a design speed of 360km/h.