THE first of 19 Avenio low-floor LRVs being supplied by Siemens for Qatar's Education City light rail line has left the company's test centre at Wildenrath in northwest Germany on the first stage of its journey to the Gulf. 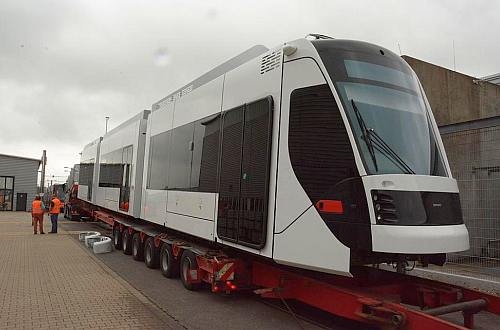 The 27.7m-long three-section vehicle, which underwent climatic testing at the Rail Tec Arsenal facility in Vienna before moving to Wildenrath, will be shipped to Qatar from the port of Bremerhaven on Germany's North Sea coast.

Siemens was awarded a €100m turnkey contract by the Qatar Foundation in July 2012 to equip the 11.5km line, which will link Education City with the Doha Metro. In addition to signalling and communications systems, electrification, and depot equipment, the contract includes a fleet of 19 Avenios, which will be equipped with the Sitras HES onboard energy storage system for catenary-free operation.