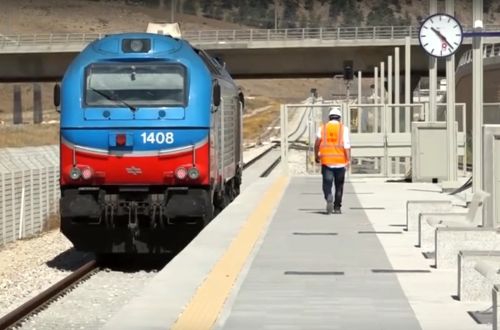 The Valley line is expected to open in October. The $US 1bn project includes the construction of five new stations and uses part of the alignment of the 1050mm-gauge Hedjaz Railway, which was abandoned in 1951.

One project involves the construction of 30km double-track line from Afula, on the Valley line, to Tiberias on the Sea of the Galilee. The line will include several tunnels and bridges, and a freight terminal near Tiberias. A journey time of 1 hour is envisaged from Tiberias to Tel Aviv. Katz is now pushing for the Valley line to be upgraded to double track to match the Tiberias line.

The second new line will be an extension of the Acre - Carmiel line, which is due to open in July 2017, to Kiryat-Shmona in Upper Galilee near the Lebanese border. The scheme will include two 11km tunnels under the city of Tzefat and a 400m bridge.

The line will have a station at Miron which is visited by thousands of pilgrims in May each year - this year a fleet of 7000 was needed to transport the pilgrims. Construction of the Shekels 7.4bn ($US 1.9bn) line, which will be electrified and have a maximum speed of 160km/h, is expected to take up to five years.

Journey times from Kiryat-Shmona to Carmiel of 26 minutes and two hours to Tel Aviv are envisaged.