QATAR’s prime minister and interior minister, Sheikh Abdullah bin Nasser bin Khalifa Al-Thani, together with the transport and communications minister, Mr Jassim bin Saif Al Sulaiti, travelled on an LRV from the depot to Lusail to mark the start of test running on the first section of the 28km three-line Lusail Tram network. 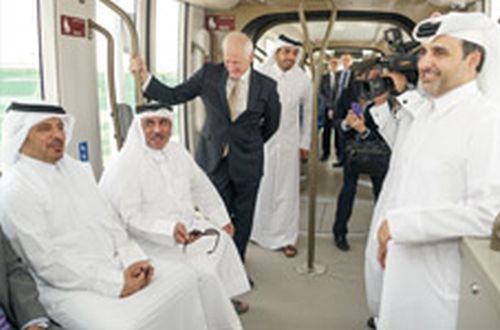 Alstom, as part of the Qatari Diar Vinci Construction consortium, is supplying 28 Citadis low-floor LRVs. Each 33m-long vehicle has five sections divided into two sections, one for families, the other for commuters. Each family section has 16 fixed and eight folding seats, while the standard sections have 32 fixed and eight folding seats. Space is also provided for wheelchairs.

The LRVs features screens to display a mixture of travel information and entertainment. External destination screens are also fitted to the front, rear and sides of the LRVs.

Qatar Rail says the Lusail Tram project is now 77% complete and is due to open in 2020.

Referring to the one-year anniversary of the blockade against Qatar, Eng Abdulla Abdulaziz Al Subaie, Qatar Rail’s managing director and CEO, said: “Over the last year we have devoted all our efforts to overcoming the challenges we faced and adapting to the ongoing developments. We also focused on developing alternatives, at multiple levels, to ensure that the progress of our projects is not jeopardised and that everything goes according to schedule and plan. We were also keen on finding suitable alternatives for our suppliers and manufacturers from other countries; as a result, we relocated some manufacturing activities to Qatar in cooperation with local companies.”

Qatar Rail says it has achieved the best rate of progress rate in one year on the Doha metro project since its launch in 2013. By end of May the metro was 85% complete, compared with a 59% completion rate one year ago. Civil works have been completed, while mechanical and engineering is 69% complete, and architectural finishes are 46% complete. The 113km first phase of the network comprising three lines is also due to open in 2020.

For more data on light rail and metro projects around the world, subscribe to IRJ Pro.